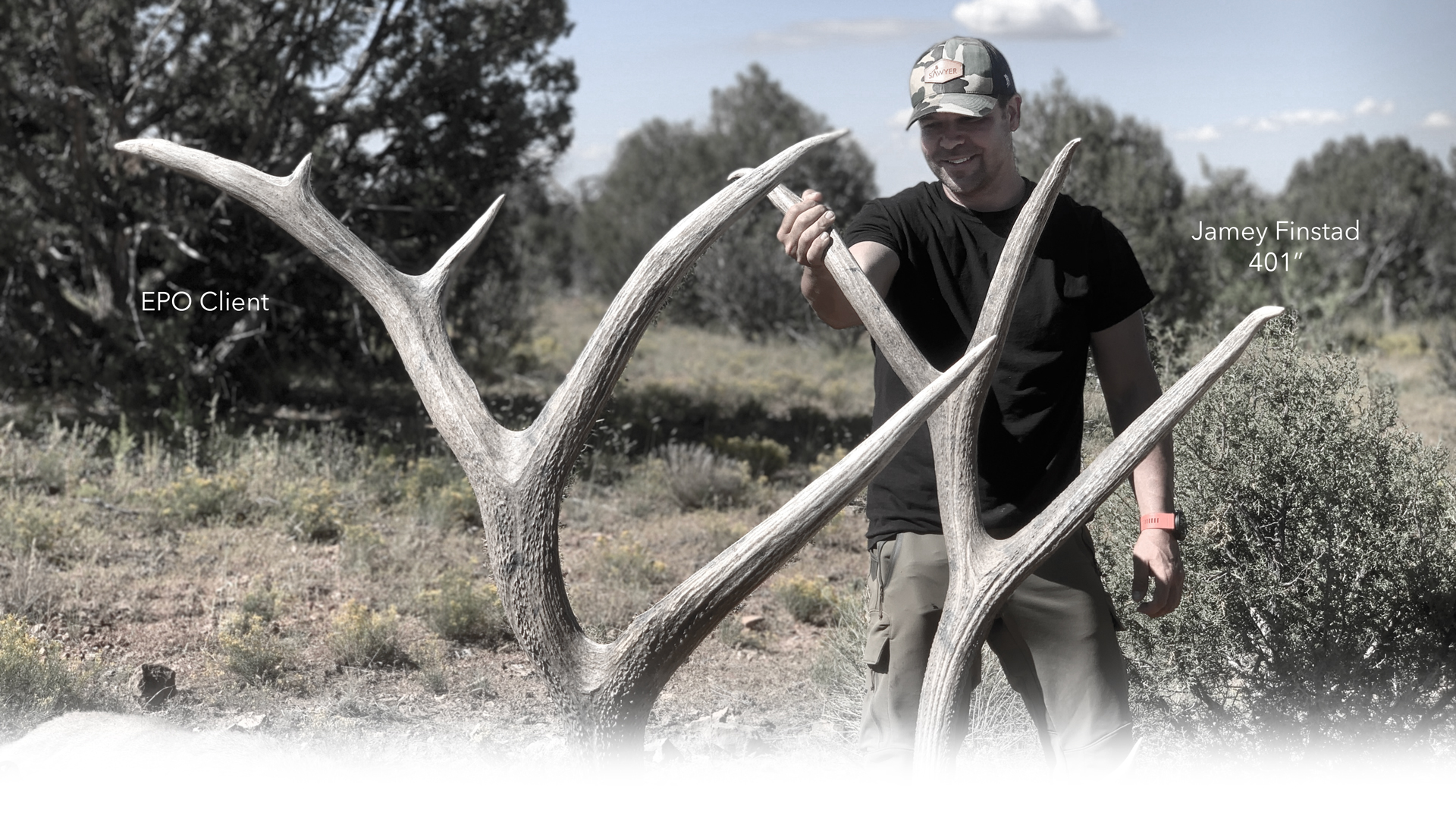 Arizona is known for it’s large scoring pronghorn antelope but over the past 30 years human enchroachment, drought & predation have taken their toll on the over all herd.  The now shrinking herd is at near RECORD lows & Arizona is offering just 378 General Pronghorn Antelope permits for the 2022 season.

In 2021 Dave Seno purchased one of Arizona’s Pronghorn Antelope Governor Tags for the 2020-21 season. His tag purchase funds went directly toward helping our pronghorn antelope populations that desperatly need all the help they can get.

We scouted all across the state & ultimately picked out a big buck we called V-man.  This buck was the largest scoring buck we guided & found in 2021.  We can’t thank Dave enough for his tag purchase & for hiring Team EPO to assist him on his hunt.

While scouting hard in 2014, we were able to find a big pronghorn antelope we called “The Heavy Buck”. He had great bottom in mass & was obviously one of 2 bucks were were looking at. Ultimately, decided to shoot another great buck that went 86 inches gross.

Shane Wright called us in 2015 after drawing an Arizona Rifle Pronghorn Antelope tag.  We discussed the complex unit structure & the obstacles of finding a solid mid-80’s pronghorn.  We mentioned “The Heavy Buck” was on top of our list to re-find & look at.  Shane decided he was ready to hunt with us & we went searching for our buck.

After multiple scouting days & looking over several nice bucks, we were able to finally locate “The Heavy Buck”.  He looked bigger than ever, but knowing he was the best buck we had seen in 2 years of scouting this unit, we did not press the issue.  Being frank, it didn’t matter if he was 86 inches or 90 inches, he was the best buck we knew of in this unit, thus we didn’t want to attract any attention or bump him just days prior to the hunt.

Here is video of “The Heavy Buck” just days before we killed him:

We were able to relocate this buck in 2015 after several days of searching. He was big, real big.Any guesses on what his ground score was?

Opening morning found Shane, Chris (Shane’s brother) & myself glassing the last spot I saw The Heavy Buck.  After a few minutes we picked out a doe & then he appeared.  Shane & I raced around the pronghorn in the trees.  Eventually we spotted him & he was well with in range.   Click here to watch  Shane shoot The Heavy Buck.

After waiting over 20 years for an Arizona Pronghorn Antelope tag, Ty Nuessle finally drew his tag.  We had talked with Ty several times & also had the privilege of hunting with Ty’s dad in 2014.

Ty wrote a brief story covering his hunt, so we felt incline to publish it:

After I saw our buck go down in my scope, Craig and I immediately jumped up, high fived, hugged and hollered. This is the first time I remember not being able to control my breathing after all the circumstances that had just unfolded. We just did what many others set out to do that morning and I was feeling overwhelmed with joy, thankfulness, love and appreciation.  I had 22 points and had waited a really long time for this Arizona tag as many of you know. This goes all the way back to getting the dreaded pink slips in the mail when we were unsuccessful in our applications.

My guide, Craig Steele of Exclusive Pursuit Outfitters texted me a picture of a great looking Antelope in mid August.  His prongs flared out, he had good length and maybe mass that complimented his mature body. We were less than a few weeks away and the excitement was starting to escalate in a hurry. As I was driving up to camp on the morning before our hunt, I was listening to “Kern River” and was so humbled to have this opportunity and to know that I would also be sharing this with my Dad (Mark) and my brother (Gentry). I was fortunate enough to be a part of my Dad’s Antelope hunt last year with Craig and I was looking forward to a repeat.

Our hunt started early on the morning of opening day as we knew there were many hunters pursuing the same buck that I had a picture of on my phone. We saw a lot of lights from other pick-up trucks coming in not too long after we were in our spot and the added pressure was obvious that things were going to get a little Western. We spotted an awesome buck that had been nicknamed “Towers” as the sun creeped up. My Dad said “am I looking at this thing right”? “He looks huge”! I know, but I wanted to stick to the plan. Suddenly, Craig spotted the buck we were after, the tables were in our favor and the race was on. We quickly made our way to the backside where the prairie met the trees. We hiked around and glassed but we couldn’t turn him up. We heard a shot way off in the distance. Did someone get him? We were a little discouraged but made our way back around where we first started off. My Dad spotted him, he was a mile off but he was still alive! We walked out into his direction knowing that hunters were right on top of him but maybe and just maybe they would miss and he could get pushed to us?

All of the sudden, we were in a pickle. This awesome buck that we were after and so many others as well was on the run after being shot at and was running untouched with his does as we had hoped for but in the opposite direction to even more hunters. The tables had turned in the opposite direction again and the odds were against us. At the same time, there was “Towers”.  375 yards from us and Craig says to me “this will have to be your call, what do you want to do”? Good grief, am I crazy to pass up this big buck in hopes of shooting one that might be bigger? The answer was yes, I was crazy. If he was still alive, I knew we had to be hunting him. Once again, the race was on and Craig’s experience had taught him that this buck was going where he has seen him go before.

As we swiftly changed gears and headed in the direction towards the new area, we had lost him. We glassed for a while but couldn’t find him. He didn’t make it past the other hunters.  I was feeling discouraged and I knew that by this time “Towers” was more than likely someone else’s memory too.  I wasn’t second guessing myself and thinking that I made a bad call because that was the decision I had made and I accepted it. But man was I feeling disheartened. As we were making our way back towards the last sighting, there he was! He was in fifth gear tapped with his harem and they ran right through all the other excitement to a new area.

Suddenly, I realized the tables had turned again and were now back in our favor. We were in the prime position and it was our chance. Craig says “they’re going to go down into that draw and we’re going to kill him.” Wow! Was I on fire. My Dad got to a vantage point to glass for them as Craig and I hustled about a half mile to get into position.  As we snuck in, I had the legs on the bi-pod extended all the way to hold the 30-378 up at about 375 yards but the slight rise in the slope didn’t afford me the elevation I needed to see clearly above the tall grass. We scooted up little by little until I could get a clear view. Striving to hold the crosshairs steady on him in the wind after running while keeping my emotions in check and coming to the realization that all of this preparation and hard work was in the maximum intensity brought it all in together as I let the air out of my lungs and pressed the trigger. I hit him a little far back and his does bolted without him. He walked about 20 yards towards us and further down into the draw. I am normally very quick with my follow up shot but when he moved downward, I lost sight of him once again. Craig had me run up about 20 yards until I thought I could sit down and get another shot with an unobstructed view as the thought of him taking off was bearing down on me. As I plopped down and settled in on him again, I pressed the trigger one more time and watched him collapse in my scope. What an unbelievable feeling that consumed my whole being as Craig and I celebrated our accomplishment.

It was 8:45 and as we looked back, there were three people approaching towards us about a hundred yards away. They walked up and introduced themselves as Shane Koury, his son Stephen and their hunter Brian. It took me a minute to realize who these guys were but if you’re an outdoorsman in this great state then you know exactly what kind of reputations these gentlemen have. They thought they were going to kill this buck and were surprised to hear our shots. Since they were close by, they wanted to congratulate us and see the buck for themselves. These three guys were extremely admirable and a great example of a genuine sportsmen. I could see how these guys would be disappointed but they didn’t show it at all. In fact, they were unaffected and truly happy for us. They still had a lot of work ahead of them so they were on their way in quick order and we wished them luck.

As I write this, I am still in amazement that we ended up putting our tag on this unbelievably beautiful creature named “Heart”. What so many other people worked so hard to do and who were just as deserving of him as we were and we were the ones that were giving God the glory as He revealed more of His love and blessings. Craig said “It’s like being at an urban lake with only two fish in there and twelve poles in the water and we just happened to bring one to shore.” I am so appreciative of Craig. He is an authentic person full of raw emotion who puts it all out there for everyone to see. He’s a great hunter, an extremely hard worker who is so deserving of the outcome because of his effort and time he puts in for his hunters and just the kind of guy you want to surround yourself with. I put all my trust in his abilities that he would give me the best opportunity at a true giant and I was honored that he guided me to this buck of a lifetime.  Thank you.

Thank you to my Dad who is my best friend and included me as much as he could on hunts from a young age and taught me respect for wildlife.

Thank you to my brother who is always the one to bring the laughter. I am glad you were there to share in this wonderful memory.

Thank you to my wife Nicole and kids who patiently put up with me and who prayed over my protection. I love you.