In 2015, Joel Ziegler drew a rare early rifle elk tag in Arizona.  After some phone conversations with Joel, he gave us the privilege of assisting him on his quest to find & take a trophy bull.

It was an awesome morning for everyone involved. We were truly blessed with the privilege of guiding Joel on such a rare trophy elk hunt.

We found this bull a few times and decided to call him Brahma. Any guesses on what he scored? 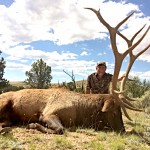